"What an eyesore... Disappear."
―Isley of the North to Helen and Deneve[src]

Isley, sometimes romanized as "Easley", was Claymore No. 1 from the first generation of Claymores, at a time when male warriors were still being created. He Awakened at some point and became the Abyssal One of the North.[1] After defeating Luciela, he also gained control of the South.[2] He was called the "White Silver King" (白銀王).[3]

Isley had a youthful, "pretty boy" appearance with long, silver hair, which earned him his nickname.

In his Awakened form, he resembled a huge, sleek, black centaur with glowing, pupil-less, ice-blue eyes. His greatest assets were his arms, which could morph into any form necessary to better help him defeat his opponents. In his Awakened Form, he is about 10 m tall.[4]

Isley was a character with two faces. On the one hand he always came across as a polite and cheerful person, on the other hand this may have been only a facade to hide his cruel and sadistic personality. He apparently had no problem with sacrificing his entire army of Awakened Beings, including Rigardo. Isley later claimed that he didn't like acting in groups. However, Isley also displayed a caring, human side, when he sent away Raki and Priscilla to protect them. He considered both as his family. At his death, he wished his family could have lasted a little longer.

Isley had a certain pride in himself as a warrior. When fighting the Abyss Feeders only at the very end of his fight with them did he finally transform his arm into a sword, one that looks suspiciously like the one used by Claymore's, saying that 'in the end, I am forced to resort to this" suggesting that, this was the weapon he was best with, and that using it was a last resort. as he didn't use it against Luciela, another Creature of the Abyss, even she was not worthy of it. 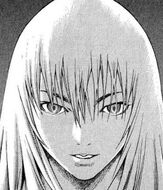 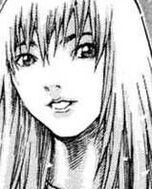 Isley displays his friendly side
Add a photo to this gallery

Past and Early Life[edit | edit source]

Isley was Claymore No. 1 of his generation—a time when male warriors were still being created. He was the last male warrior to Awaken, and according to Chronos he did it voluntarily, perhaps with the intent to hunt down the other ones from his generation and take responsibility for their failures as warriors. But the mind of an Awakened Being is very different from a human's, and Isley instead became one of the monsters he had sworn to hunt, and the first Abyssal One. Upon Awakening, he took control of the Northern Lands.

Most people believed that Isley defeated Priscilla when she went on a rampage in the North and made her his consort. However, this was incorrect; despite initially holding the upper hand, Isley had nearly half of his torso torn off by Priscilla, who, in contrast, managed to regenerate from her injuries at phenomenal speed. For unknown reasons, Priscilla suddenly reverted back to her human form in the midst of battle. Finding that her mind had regressed to a childlike state, possibly the result of the physical trauma, or her hunger, Isley responded by returning to his human form as well. He swore allegiance to Priscilla. His motivation at the time was to use Priscilla and bring everything under his control.[4]

Isley was the reason behind the Northern Campaign as he managed to raise an army of 27 Awakened Beings, spurring the Organization into action.

Despite losing many soldiers, including Rigardo, Isley's group defeated all 24 Claymores. He, then, split his remaining forces, sending 11 to the East against the Organization and 12 to the West against Riful. He, himself, went straight South to fight with Luciela.[5]

During the Northern Campaign, Isley found Raki and took him in. Later, Isley agreed to teach the young boy swordsmanship, commenting that Raki reminded him a lot of how he was in his own youth.[6]

With the Organization and Riful thus occupied, Isley moved against Luciela of the South, narrowly defeating her.[2] It is later revealed that his intentions were twofold: by killing Luciela, Isley eliminated the possibility of a team-up between her and Riful, which would have been the only possible way to defeat Priscilla.[7] This effectively made Isley and Priscilla the single most powerful faction. Conquering Luciela's lands also ensured that Isley fulfilled his promise to Priscilla, namely to take her to the South to find her parents.[4]

After the timeskip, Helen and Deneve encountered Isley hiding in a town in human form dressed in rags and looking stressed out. They attempted to avoid being detected, but Isley easily figured that they were half-Yoma, severely wounded Deneve, and then engaged in a fight with the two. It was at this point that the "demons" appeared.

It turned out that these "demons" were the remains of the 11 Awakened Beings Isley sent to Staff seven years ago. After their defeat at the hands of Alicia and Beth, the Awakened Beings' flesh was implanted into human girls, effectively turning the girls into eldritch bloodhounds. When Isley and the "demons" began to fight, Helen, Deneve and Dietrich took the opportunity to escape.

After fleeing, Dietrich explained to Helen and Deneve how the "demons" came to be. The new half-breeds were designed specifically to track and attack Isley by his scent, retreating should he reduce their numbers by more than half. They pursued him relentlessly, eventually adapting to his battle strategies so well that they could return from defeat before he had completed regenerating. They were called Abyss Feeders. Dietrich revealed that Isley was still wounded from the last encounter and was not fighting at full capacity. This revelation enraged Helen, realizing she and Deneve were thwarted by an injured Abyssal One.

During the battle, Isley repeatedly decapitated and dismembered the Abyss Feeders. However, his own body was unable to regenerate fast enough to keep up with the damage he was taking. He was also unable to stop the "demons" as they continued regenerating and adapting to his attacks. Eventually three of his legs were destroyed and his body collapsed to the ground where he is set upon by the "demons," who consume him alive. Had he managed to defeat even just one more, the Abyss Feeders would have retreated for the moment. He spent his last moments reminiscing about his time with Raki and Priscilla, wishing his life with his makeshift family could have continued just a bit longer.

Excluding immediate intervention, Isley is assumed to be dead.

Isley's most notable ability was to shape shift his arms into various weapons. He has thus far been seen using his arms in the form of a lance, bow, shield, claw, axe, and a massive broadsword similar to those used by Claymores.

When using his arm as a bow, he could simultaneously fire a small barrage of organic arrows, each of which could change their trajectories to home in on their targets. Even in human form, his arrows are powerful enough to destroy huge chunks of mountains. After transforming to battle Luciela their battlefield was turned into a massive wasteland and several other mountains had been obliterated.

Despite being much larger than Rigardo, Isley's incredible speed easily outclassed his and it was noted by Helen that his Yoki was even greater than that of Riful, which would make Isley the most powerful of the three Abyssal Ones.[8]

Chronos stated even when he was still a warrior he would've outmatched all the Seven Ghosts working together and further stated that the overall gap in power between himself and Rigardo,the number 2 of the Male Generation,who were noted to all possess above average power, to be massive ,further giving credence to Isley immense power even as a Claymore.

Isley, Rigardo, and Dauf never really got along, even during their time as Claymores, The three competed with each other for the coveted position of No. 1. After some time, Dauf sided with Riful of the West while Rigardo sided with Isley.[5]

While Dauf placed his loyalties to Riful, Rigardo remained by Isley's side as his right hand man, honoring a bet the two had should one defeat the other. Though the two didn't get along with each other, Rigardo served Isley without question and he played a key role in the invasion of Pieta.

In their first encounter, Priscilla defeated Isley by destroying half of his torso. Through this encounter, the events of the Northern Campaign were set in motion, with Priscilla used as insurance in his upcoming battle against Luciela. The story of Isley's defeat was changed - the new story circulated being that Isley was the one who defeated Priscilla and made her his lover. Since conquering the South, however, Isley truly had affection for Priscilla and saw her as family. When the Abyss Feeders attacked, he forced Priscilla, along with Raki, to leave him in order to protect them. However, despite caring for Priscilla, Isley understood the threat she would represent if she were to regain her former power. Thus, he trained Raki in the Claymore fighting-style and advised him to drastically raise his physical endurance, with the intention of having the boy attack Priscilla's blind-spot after she would (mistakenly) think she'd cut him down.

During the Northern Campaign, Isley encountered a wandering Raki, and, finding Priscilla to be drawn to the boy, took him under his wing. In Raki, Isley saw a reflection of himself in his younger years, and trained him in the art of swordsmanship. At some point, either Raki discovered Priscilla's true nature or was confided of it by Isley, and, should she ever fully Awaken again, the former No. 1 helped the boy train for a plan to cripple her at a point when her guard would be lowered. Over time, the Abyssal One saw the boy, along with Priscilla, as family, eventually revealing to Raki the fact he was an Awakened Being. When the Abyss Feeders attacked, he forced Raki and Priscilla away in order to protect them. Ultimately, his dying wish was to see them once more, even if it was mere fantasy. Isley pondered in his final moments how he had become content with even the barest of meals as he watched Raki grow up with Priscilla at his side. This shows a defining moment of humanity for Isley.

Riful would serve as his main rival in the power struggle over the lands, attempting to acquire strong Claymores to create an Awakened Being army of her own. Ultimately, Isley would win that battle after defeating Luciela in combat, revealing his trump card in the form of Priscilla.

Retrieved from "https://claymore.fandom.com/wiki/Isley?oldid=32056"
Community content is available under CC-BY-SA unless otherwise noted.