Flora was Claymore No. 8 of Clare's generation. She was nicknamed "Windcutter Flora" (風斬りのフローラ, Kazekiri no Furōra), after her lightning-fast sword drawing technique. It was considered to be the fastest draw of any Claymore.

In the West, "Flora" derives from the Latin "flosis," meaning "flower." "Flora" is the Roman goddess of beauty and flowers. Claymore's Flora is an exceptionally (physically) beautiful character. Her Windcutter technique is believed to named after the Greek myth of the West Wind.

Flora had light blond hair that fell to her chest in soft waves. Several locks framed her face and hung in front of her forehead. She wore the standard Claymore uniform and had silver eyes like the rest of the Claymores. She had a child-like face and was considered to be exceptionally beautiful.

Flora was very soft-spoken and obediently followed orders from her superiors. She became Miria's second-in-command during the Northern Campaign due to her being the highest-ranked warrior after Miria. Unlike most other Claymores (such as Helen) who speak bluntly and informally, Flora always used polite language and a gentle tone of voice, even when she was trying to impose tight discipline on Miria's behalf. 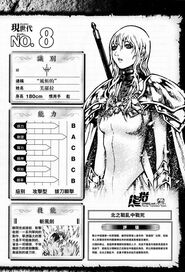 The Windcutter is Flora's signature technique. It requires Flora to draw and re-sheath her sword at lightning speed, and since it doesn't consume any yoki, she can use it continuously without tiring.

This technique earned her the nickname "Windcutter Flora" and the title of "Fastest sword amongst the Claymores," though this title later goes to Clare. After Flora's death, Clare masters and uses this technique.

As a division captain during the Northern Campaign, she leads the following Claymores: Lily (#18), Wendy (#30), Karla (#39), and Clare (#47). During the first battle of the North, Flora is unwilling to rely on Clare and Karla due to their low rank and lack of power. She tries to end the fight immediately, but the Awakened Being her team confronts evades her attack. Flora attacks again but is almost killed by an attack from behind by Karla, who is being controlled by the Awakened Being. It uses its Yoki-controlling abilities to pin the rest of the team to the roof of a building, putting them at Karla's mercy. Fortunately, Clare uses her Quick Sword to destroy the surface of the roof and save them.

Undine's team then arrives as back up, with Undine and Deneve eventually managing to sever the Awakened Being's head. The creature is still alive, however, and attempts to force Wendy and Juliana over their limit. Flora uses her Windcutter to slice the being's head to pieces, saving the two Claymores. Clare also helps by using her Quick Sword, which impressed Flora.

After the first skirmish, she challenges Clare to a duel in order to test her Windcutter sword style against Clare's Quick Sword technique. After the duel it is determined that Clare's Quick Sword is the faster, but less precise, of the two techniques while still being of equivalent power. After that confrontation, Flora surrenders the title of "Fastest Sword Amongst the Claymores" to Clare.

In the second skirmish, Flora is left to be guarded by Clare on the orders of Jean, who realizes Rigardo is killing the team captains. When Rigardo attacks Jean, Clare abandons her post to help her but is nonchalantly knocked aside. Flora is then left unprotected and at the mercy of Rigardo, who effortlessly slices her in half. Posthumously, Clare uses and has mastered Flora's Windcutter technique during the seven year timeskip.

When Flora first encounters Clare, she thinks Clare was an ordinary, if weak, Claymore warrior fighting in the Northern Campaign. However, when she sees Clare using her "Quick Sword" technique, she changes her opinion. She challenges Clare to a duel to see who has the faster attack and gives up her title when Clare's attack is faster. She seems to have great respect for Clare from then on.

During the Northern Campaign, Flora seems to have great respect for Miria and possesses complete faith in all her decisions. She grows annoyed at Undine criticising Miria's plan after the campaign's first skirmish and, in an effort to diffuse the situation, explains how everything had worked out perfectly. She also had no problem using her Windcutter to quiet the other Claymores when Miria was trying to speak.

Retrieved from "https://claymore.fandom.com/wiki/Flora?oldid=31240"
Community content is available under CC-BY-SA unless otherwise noted.