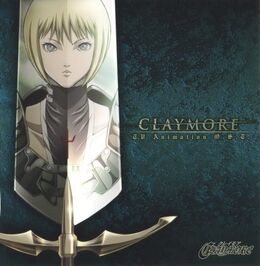 The Claymore anime series is based on the manga series of the same name by Norihiro Yagi. The episodes are directed by Hiroyuki Tanaka and produced by Madhouse Studios. They adapt the first through eleventh volumes of the manga over twenty-four episodes. The remaining two episodes follow an original storyline not found in the manga written by Yagi. The series aired between April 2007 and September 2007 in Japan on Nippon Television. The series follows the adventures of Clare, a Claymore, or half-human, half-Yoma hybrid, and her comrades as they fight for survival in a world filled with Yoma, or shapeshifting demons.

Two pieces of theme music are used for the episodes: one opening theme and one ending theme. The opening theme is "Raison d’être" (レゾンデートル?, lit. Reason for being) by Nightmare. The ending theme is J-pop singer Riyu Kosaka's single, "Danzai no Hana~Guilty Sky" (断罪の花 ~Guilty Sky~?, lit. Flower of Conviction~Guilty Sky). A single for "Danzai no Hana~Guilty Sky" was released on May 30, 2007, and the single for "Raison d’être" was released on June 6, 2007.

Retrieved from "https://claymore.fandom.com/wiki/Anime?oldid=31619"
Community content is available under CC-BY-SA unless otherwise noted.