Anastasia was Claymore No. 7 of the final generation of Claymores. She is also known as "Winged Anastasia" for her ability to seemingly 'float' in the air.

Anastasia appears as an attractive young woman with very long, pale hair that falls to her waist, styled in elegant "princess" curls with straight bangs. She also possesses long, feminine eyelashes and silver eyes, and wears the standard warrior uniform. She has a slightly whimsical smirk and she bears a slight resemblance to Roxane.

Anastasia possesses a very kind personality, treating her fellow warriors like her closest friends and even teasing them with smart remarks. She strongly believes that as a single-digit, it is her duty to protect those weaker than herself and lead them through the battles. She demonstrates a great deal of loyalty to her fellow Claymores. Unlike other Claymores, she takes a liking to the "vacant silver world" of Alphonse.[1]

Anastasia has the ability to "float" in the air, earning her the nickname "Winged ." She does this by surrounding the area with strands of her hair that she forms like a clothes line and she stands on them.

Anastasia notes that once enemies become familiar with her 'winged' ability, the move becomes utterly useless or if her hair gets cut off, it could impact her ability. 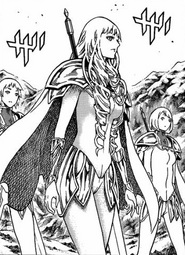 Anastasia replaced No. 9, Nina, after the failure of the Dabi Awakened Being Hunting Party.

The Ghosts are heading to Staff, intending to rescue Miria. But Tabitha senses a party of Claymores heading in the same direction. The party is lead by Anastasia.

Organization headquarters recalls Anastasia, due to the critical situation in Staff. She travels south with three Claymores, Nike, Phina and Keira, on the "Northern Path," a secret route to Staff. But they meet a man who morphs into an Awakened Being.

While fighting him, she shows her special ability of floating mid-air. She says she cannot forgive those that injure her friends. As she defeats the Awakened Being, other humans appear, apparently infected with Yoma as well, prompting the party to defend themselves.[1][2]

During the ensuing battle, Phina gets injured by one of the Awakened Beings, which prompts Anastasia to rescue her. Familiar with Anastasia's 'winged' ability, Nike uses her commander's hair as a springboard to dodge the Awakened Beings' attacks. After Keira is sent away with the injured Phina, Anastasia and Nike are left alone to fend themselves, and Anastasia herself is injured. Just as it seemed like the end, Dietrich along with members of the Seven Ghosts appear to save them. Watching Deneve, Tabitha, and Helen fight, Anastasia and Nike join the ghosts and Dietrich in fighting the remaining Awakened Beings. Afterwards, Anastasia pledges to help the ghosts in destroying the Organization by offering to show them the route.[3]

She then went to the Awakened Being creation facility and is seen fighting them. Later on the group saves Miria from the Awakened Hysteria, and Anastasia is seen helping Miria standing just behind her. Then she scatters her hair all around the battlefield, and she and the new arrivals begin fighting Hysteria, seemingly gaining the advantage until Hysteria unveils her Awakened form's true ability - blinding speed. As the battle continues, she is stabbed by Hysteria but is later freed by Nike who helps her by using the sword stuck in Hysteria's throat.

Later on, Anastasia's "winged ability" proves invaluable for the fight against the Awakened Hysteria, as Miria uses her strands of hair to "fly" and lure Hysteria in the middle of the fight of the Awakened Cassandra the Dust Eater and Roxanne of Love and Hate. She then uses the last strands of hair to propel herself to safety, out speeding Hysteria, who meets her doom left stranded in the amidst the two other Abyssal Ones' attacks.

Later, Anastasia is seen amongst the other warriors during their celebration of the end of the Organization. Afterwards, she is seen standing with the Organization's warriors in Rabona when Europa makes to attack the city. Before the battle begins, Anastasia strings up her hair around the city and encourages warriors confident in their abilities to use them to their advantage.[4] As Europa attacks, the No. 7 stands with the other single-digits in providing a distraction while Miata Awakens. She even uses her hair as a kind of lasso to help stall Europa's movements.[5]. When Europa begins to go after the soldiers of Rabona, Anastasia moves in with Dietrich in an attempt to attack, but they are both wounded and repelled.[6]

Anastasia treats her comrades as friends. This attitude reflected positively especially towards Nike, who is willing to stay by her side for better or for worse.

Shows familiarity towards Dietrich, referring to her as stubborn and hard headed for trying to overthink why she follows Deneve and the other ghosts.

Retrieved from "https://claymore.fandom.com/wiki/Anastasia?oldid=32167"
Community content is available under CC-BY-SA unless otherwise noted.